Dr. Kanchan Bhattacharyya, interviews the living legend of Orthopaedics in India, Dr. Sailendra
Bhattacharya and presents the pearls of the interview here

Dr. Sailendra Bhattacharya is a living legend in the field of Indian Orthopaedics. Born in Calcutta on
26th of January,1924, he graduated from RG Kar Medical College and Hospital in 1949 and after the mandatory PRCA, became the first Honorary house surgeon in Orthopaedic Surgery under Dr. Sarbadhikari, going on to be the Registrar, at the same institution.

In 1953 he was selected by the Indian Medical Association to visit the University of Oklahoma,USA, where he was accepted in the Orthopaedic residency program and incidentally one of his colleagues there, was the redoubtable Dr. Charlie Rockwood. He had barely spent a year and a half, when his father needed him, and Dr. Bhattacharya, realizing that a post graduate degree was a necessity, left Oklahoma for UK where he completed his FRCS, and returned to Calcutta in 1956. In U.K. he spent most of his time in Southampton with Mr. Alexander Law.

Back home, with a young family, life was not easy. He joined Sambhunath Pandit Hospital in an honorary capacity, and took care of Orthopaedic cases only, which was a first in that institution. Dr Bhattacharya had always been a keen surgeon, and during his short stint in that hospital he had performed several operations including skin interposition arthroplasty of the hip. What made him stand out, was his meticulous record keeping. He kept track of all his surgical cases starting from day one and never let up even when his volume had become prodigious.

During this period he was invited by Dr. S.R. Chandra, the HOD in P. G. Hospital, to join the teaching staff of Calcutta University at the University College of Medicine as a lecturer. In 1958 he went back to his alma mater as a lecturer, and stayed on for 18 years, leaving as an Assistant Professor, when he felt that the hospital was not moving forward at a pace of his liking.

He joined Calcutta Hospital, a newly inaugurated multi-specialty hospital in the city, which boasted of state of the art equipment and a modern infrastructure. Dr. Bhattacharya was a consultant for several years, and did his first THR there, which, incidentally was the first in this part of the country. He has more than 30 years of documented survival of his earliest THRs.

He was a perfectionist in every aspect of his practice. He had two sets of X-rays taken every time, of which one was for his records. He maintained his own instruments, like all surgeons of his era, with a big difference. His huge practice demanded a high volume of surgery and he had several sets of instruments for each procedure, so that he could carry out five or six similar surgeries without running out of pre autoclaved trays. This made it easy for him to comfortably operate into the small hours of the morning without relying on the limited infrastructure of the smaller nursing homes. The clock never bothered him and his surgery went on until he had it just so.

In Harrington Nursing Home, adjacent to the US consulate, and across the street from his consultancy, where he operated for years, it was customary for the last surgery to be completed at about the stroke of dawn, with the surgical team, the only people around. There seldom came a challenge he would not rise up to, and it is difficult to imagine a surgical procedure that he has not conducted and documented. He was replacing hips in the seventies and knees in the eighties, did spinal fixations and decompressions, and, of course, all routine surgeries of his era, but the orthopaedic community remembers him most, for his description and expertise in elbow arthrolysis in post traumatic elbow stiffness which he first presented in the ASI conference in 1971 and later published in JBJS in 1974. His previous publication ‘Abduction contracture of the shoulder due to contracture of the intermediate part of deltoid’ had appeared in JBJS in 1966.

Dr. Bhattacharya’s documentation and record keeping was so far ahead of his time, that he was asked to speak on this subject in Cuttack along with Dr. Shanmugasundaram. On starting his own hospital, BORRC, in 1992 he has had most of his handwritten records digitalized. Until a short time ago he still saw a select few patients every day, attended every meeting in the city, talked to everyone around him, addressing them by their first names and occasionally, personally, updating the contacts list in his latest I- phone.

A towering personality, who has been a role model to the generation next, Dr. Bhattacharya’s matchless skill and expertise, his phenomenal volume and enviable accomplishments has become part of folklore in this part of the world.

A little frail of body today, his mind is still just as sharp as it was during his heydays. His enviable appetite for knowledge has not ebbed al all, though that of food, has. However, as a host he is as keen as ever and you can never leave his room without eating all the savories that he will have lined up. 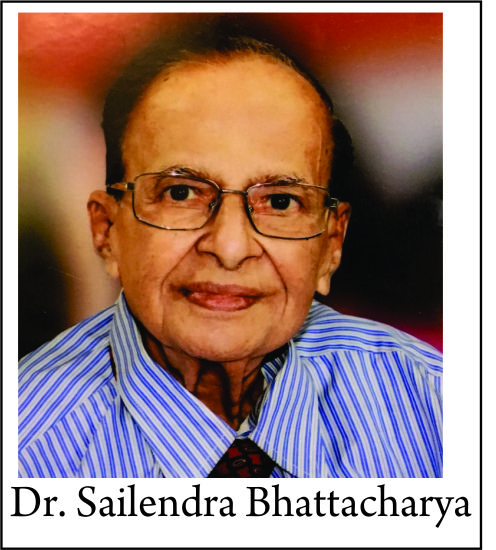