Anterior Cruciate Ligament (ACL) tear is one amongst frequent knee injuries. This injury is troublesome as it causes instability of knee while walking/running and also predisposes to the risk of early osteoarthritis in long run. So, its proper management is important, but has always remained debatable and controversial as well. Advancements in tissue engineering and regenerative medicine has changed the understanding of ACL’s anatomy and it’s healing potential and thus a renewed interest has emerged towards ACL repair again over the established gold standard “ACL reconstruction”. Novel techniques like bridging with fiber tapes, Internal Brace Ligament Augmentation (IBLA), and Dynamic Intraligamentary Stabilization (DIS) have emerged focusing on mechanical strength. Also, supplements like bio-scaffolds, platelets & platelet rich plasma (PRP) are in the offing to aid biological ligamentous healing. We will present review of past practice, current trend and future prospects of ACL repair.
Keywords: Anterior Cruciate Ligament, Repair, Reconstruction, Augmentation, Supplementation

Introduction: Persistent rotatory instability is often described in association with ACL reconstruction. Recent studies have drawn attention to the lateral sided knee structures as possible contributors to this instability. However, varying terminology and research methodology has made the results of these recent studies difficult to interpret. It is crucial that surgeons have a thorough understanding of anterolateral knee anatomy and function prior to proposing extra-articular treatment options. The most important factor in restoring rotatory knee stability is to perform an individualized, anatomic ACL reconstruction that recreates the native anatomy of the torn ACL. This will restore native knee stability in the vast majority of cases. However, a subset of patients will have some degree of anterolateral knee injury that may need to be addressed. At this time, the proper indications for surgery and the best extra-articular procedure are not known. Therefore, it is paramount that future research establishes consistent terminology and research methodology so that scientific understanding of this incredibly intricate anatomic complex can progress.
Key Words: Anterior cruciate ligament, reconstruction, Anterolateral Complex of the Knee.

The anatomy of the anterolateral knee is quite complex. However, the function of these structures becomes more obvious with greater understanding of the native anatomy. The anterolateral knee can be divided into three general layers and four main structure groups (superficial ITB, deep ITB, capsulo-osseous layer of the ITB, and the anterolateral capsule). The superficial ITB is located in Layer 1.[27] It inserts distally on Gerdy’s tubercle and just posterior to Gerdy’s tubercle. It contains fibers running to the lateral aspect of the patellar and patellar tendon, known as the iliopatellar band (Figure 1). 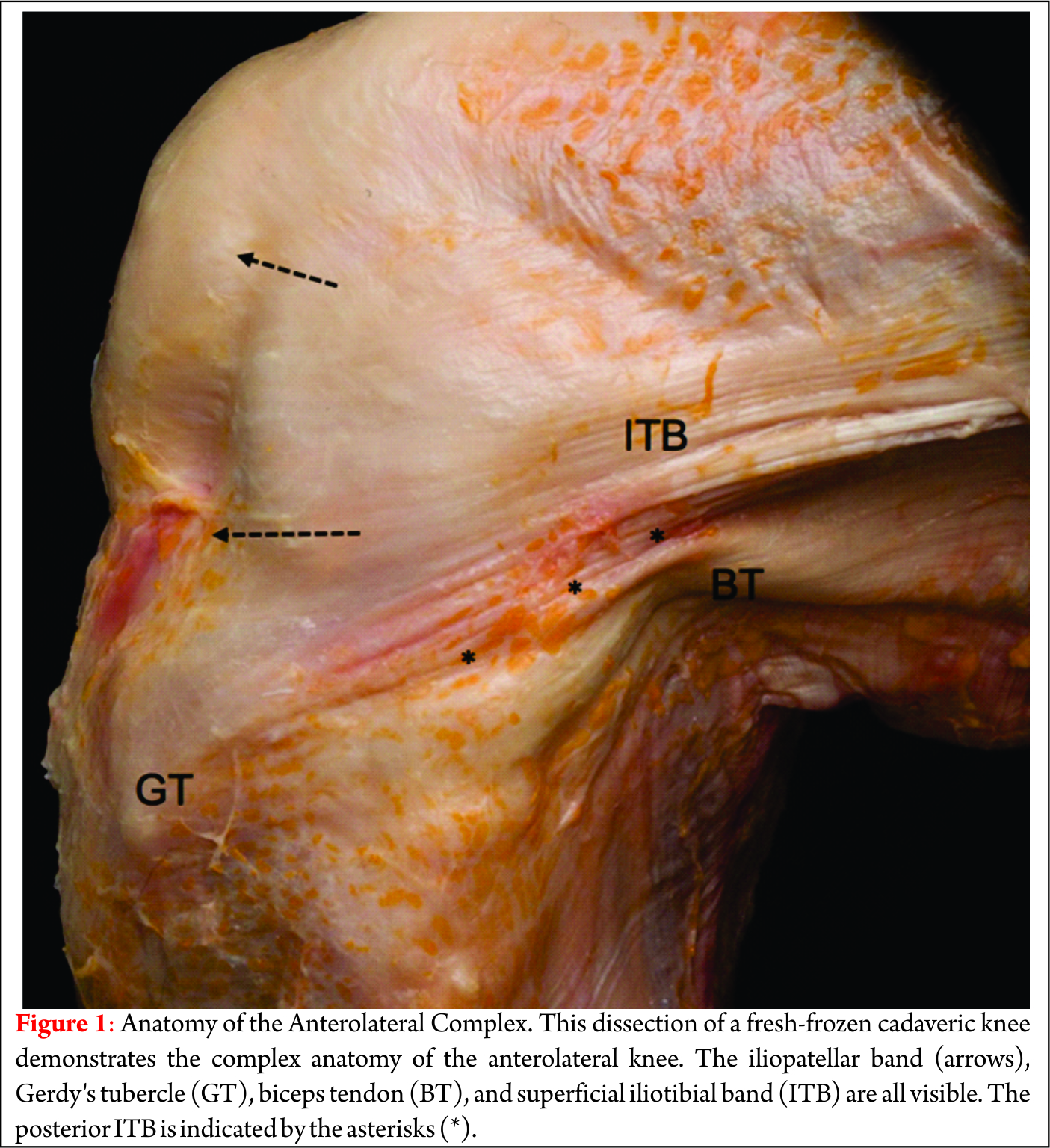 Posteriorly, the superficial ITB connects with the fascia of the biceps femoris. It attaches to the lateral intermuscular septum as well [16]. Layer 2 consists of the posterior aspect of the superficial ITB as well as the deep ITB. This layer attaches to the lateral femoral epicondyle and inserts just posterior to Gerdy´s tubercle. Proximally, the Kaplan fibers are part of this layer (Figure 2) [28]. 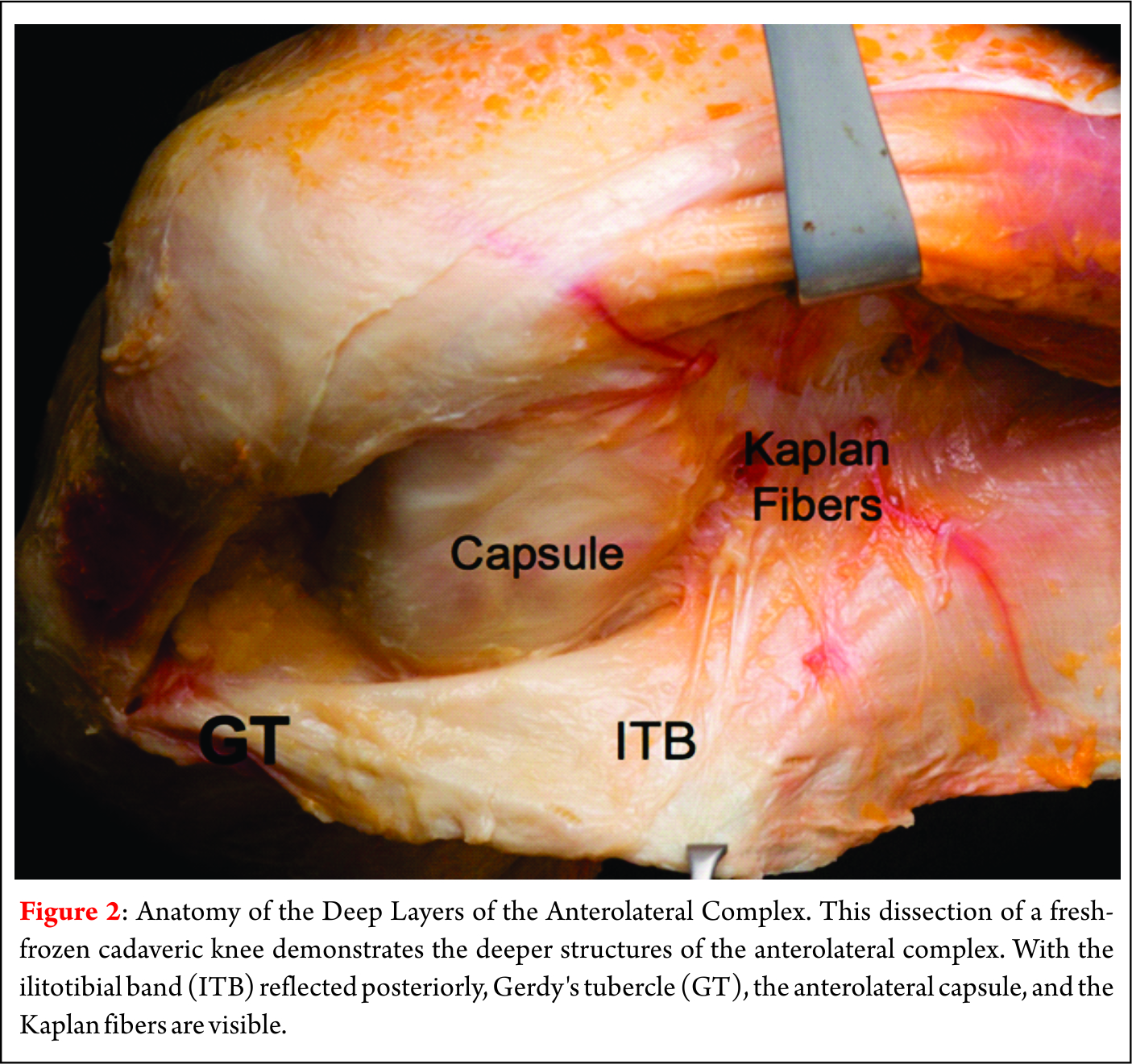 These fibers connect the superficial ITB with the distal femoral metaphysis and condyle. They also run near the superior genicular artery and its branches [17]. The capsulo-osseous layer of the ITB is continuous with the lateral gastrocnemius muscle fascia.[16] The capsulo-osseous layer merges with the rest of the ITB distally. It then inserts on an area halfway between the posterior aspect of the fibular head and the tip of Gerdy´s tubercle, termed the mid-lateral tibial tubercle. Finally, Layer 3 contains the anterolateral capsule.[27] The capsule consists of a superficial and deep layer, both of which merge into one layer more anteriorly. The deep layer passes deep to the LCL and the superficial layer passes over it superficially. It is thought that the thickening at the confluence of the two layers may be the mid third capsular ligament as described by Hughston et al.[18, 19] to be present in 35% of dissected specimens. Regarding the presence of a discrete identifiable ALL, study results have varied widely.[29] Some studies report that there is an ALL present in nearly 100% of the specimens, while others have found it to be present in a third of specimens. [12, 13, 15, 23, 24, 30] One study examined pediatric cadaver knees reported that the ALL was present in 12.5% of the specimens.[31] Some studies may have enhanced the presence of the ligament by positioning the knee structures such that the capsule was tensioned in the shape of a ligament, and then by removing the surrounding tissue.[32, 33] The anatomic location of the proposed ALL differs among studies as well. Some studies list the femoral origin posterior to the lateral collateral ligament (LCL),[24, 33] some describe it near the LCL origin,[23, 24] and some describe it as originating anterior and/or distal to the LCL origin.[13, 23, 32, 34] Descriptions of the distal insertion likewise vary. While most studies have reported the distal insertion to be located mid-way between Gerdy’s tubercle and the fibular head,[13, 23, 24, 34] others have described it as being located slightly more anterior.[11, 25] Further disagreements include the relationship of the ALL with the capsule, the meniscus, and the overall orientation of the ALL fibers.[11-15, 22, 24-26, 32-36] Regardless, it is obvious that the lack of standardization in anatomical descriptions as well as varying specimen fixation methods, dissection methods, and cadaver ages has led to discrepant descriptions and findings regarding the presence and anatomy of the anterolateral structures. As such, it is recommended that the anterolateral knee structures consisting of the superficial and deep ITB (along with the Kaplan fibers and capsulo-osseous layer) and the anterolateral capsule be referred to as the anterolateral complex (ALC).

Numerous studies have investigated the biomechanics of anterolateral knee structures. While many of these studies have investigated the relationship between the ALL and rotatory instability, results have been inconsistent. Furthermore, the actual structures considered as the ALL differ and this heterogeneity has made it difficult to interpret the findings [26, 37-42]. Although the ITB is known to confer significant rotatory stability to the knee[36] many of the studies have investigated the ALL with the IT band sectioned. On the other hand, when injury to the ALL were investigated with preserved ITB function, no increase in rotatory instability was observed.[43] Of the studies that did report greater rotatory knee instability with sectioning of the ALL, many were performed at high flexion angles which are not representative of knee position during typical ACL injury [39, 40, 44].  Importantly, the ITB has been found to be the most robust contributor to anterolateral knee stability through all angles of knee flexion.[36] The part of the superficial and deep ITB that is located between the Kaplan fibers proximally, and the insertion at the proximal tibia distally, form a discreet functional unit which contributes greatly to knee stability.[17, 20] In fact, tightening of this structure has been reported with knee flexion, as well as an increase in length.[17, 20] Robotic studies have shown that this portion of the ITB is responsible for 70% of the restraint to internal rotation restraint in ACL intact and deficient knees [36]. Some studies have reported that suggested injuries to the anterolateral capsular structures are associated with greater rotatory instability.[9, 45] In fact, increased lateral compartment translation during pivot shift (utilizing quantitative pivot shift testing) was associated with MRI-visible anterolateral capsule injury[9]. When interpreting these results, it should be noted that identification of individual anterolateral structures can be difficult via MRI, and the ALC should be considered as a whole when evaluating for injury when using this imaging modality.

Various procedures have been proposed to address anterolateral complex injuries. However, it should be noted that an anatomic ACL reconstruction, individualized for each patient, is the most important step in restoring rotatory knee stability in this patient population. In addition, other injuries such as meniscal tears, should be treated properly to help restore stability. In fact, it is not currently known which patients may benefit from extra-articular anterolateral procedures. One study reported good outcomes after a combined “anatomic ALL” reconstruction combined with ACL reconstruction. Interestingly, there was no control group to compare to, and follow-up time was less than ideal.[46] Further biomechanical studies have suggested that extra-articular procedures may play a role in patients with ALC/ALL injuries. However, extra-articular procedures carry inherent risks, including over-constraint of the lateral compartment, ultimately leading to arthritis, and wound problems. Interestingly, many of these procedures recommend the use of the ITB as an extra-articular graft. It should be noted that the ITB utilized as graft has been shown to be stiffer than many of the anterolateral structures, and may contribute to the over-constraint often described with these procedures. Furthermore, removal of a portion of the ITB to utilize in its non-native position may lead to worsening anterolateral instability. In addition, it is not known if anterolateral knee injuries will heal on their own. As such, surgeons should use caution before performing additional extra-articular procedures for anterolateral complex injuries in the setting of ACL reconstruction.

Persistent rotatory instability is a well-known finding associated with ACL reconstruction. While proper reconstruction of the ACL is requisite to achieving optimal outcomes, concomitant injuries must be considered, especially in the setting of significant rotatory instability. The anterolateral structures play an important role in this stability, and should be assessed for injury. However, the indications for extra-articular tenodeses and reconstructions are currently unknown. Unindicated anterolateral knee procedures can be associated with significant negative outcomes, and their use must be carefully considered. Future studies on anterolateral knee should use consistent terminology and sound research methodology. In fact, it is recommended to refer to the anterolateral knee structures as the anterolateral complex (ALC) to properly refer to numerous structures which make up a synergistic functional unit.